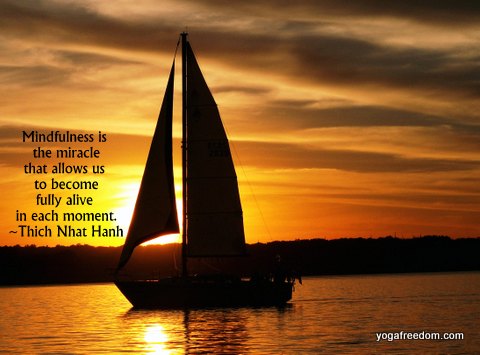 Only Breath ~ by Rumi

Not Christian or Jew or Muslim, not Hindu,
Buddhist, sufi, or zen. Not any religion

or cultural system. I am not from the East
or the West, not out of the ocean or up

from the ground, not natural or ethereal, not
composed of elements at all. I do not exist,

am not an entity in this world or the next,
did not descend from Adam or Eve or any

origin story. My place is placeless, a trace
of the traceless. Neither body or soul.

I belong to the beloved, have seen the two
worlds as one and that one call to and know,

first, last, outer, inner, only that
breath breathing human being.

Michelle Margaret Fajkus is a yoga teacher and freelance writer, editor and translator, as well as the creator of Yoga Freedom. She is a 40-something gringa Gemini in Guatemala where she lives with her family. Michelle learned yoga from a book at age 12 and found zen in California at 23. A native of Austin, Texas, she enjoys reading, writing, hiking, swimming and lounging in hammocks. View all posts by yogafreedom